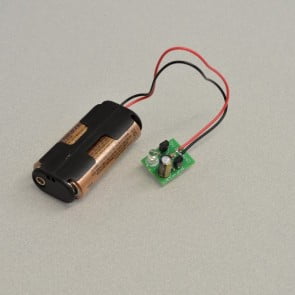 While the Blinky Light Kit does include instructions, sometimes a picture is worth a thousand words! We have assembled this quick visual guide to help you get your first soldering project built and blinking.

A Few Considerations:
Before we jump into soldering this board together there are a few points to consider.

• Soldering irons and solder are extremely hot and will burn you on contact. Be very careful when handling the Soldering Iron and any components that have been freshly soldered.
• When trimming the leads on components flush diagonal cutters can send sharp metal parts flying all over the room. Eye protection is recommended!

How It Works:
The blinky light uses two transistors to charge and discharge a capacitor. Basically the battery charges the capacitor. Once the capacitor is “full” it will discharge through the LED making a nice bright pulse or strobe. 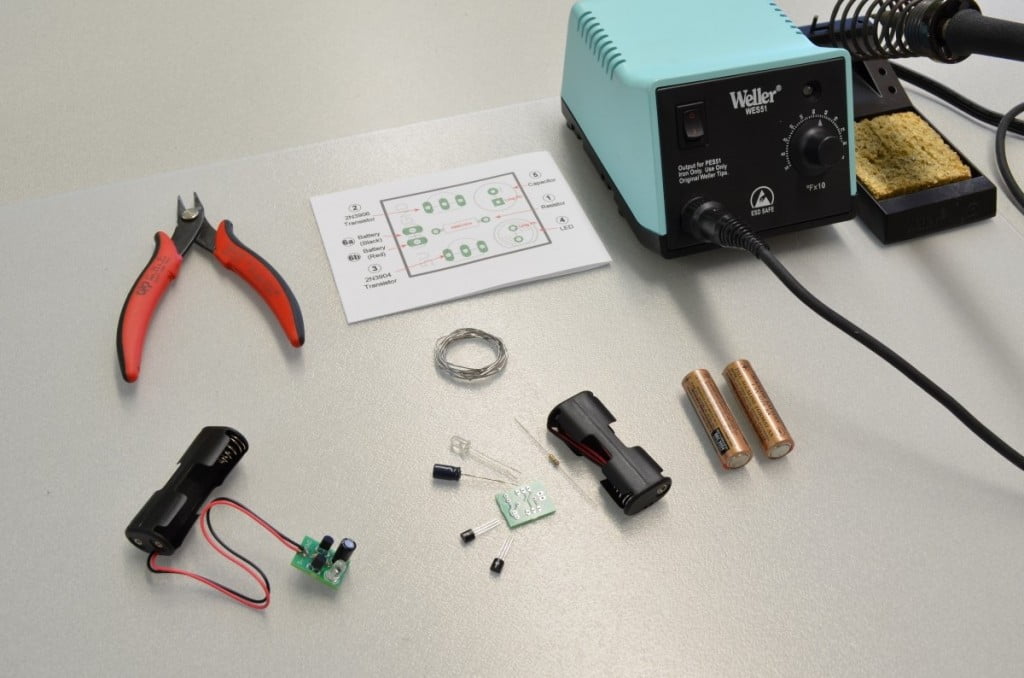 This tutorial will be requiring a few things:


Note: While just about any soldering iron out there will work with this tutorial, we do recommend using a decent soldering iron if this is your first time soldering. For the most part, cheap hardware store soldering irons are just not worth the hassle. We are using a Weller WES51 Soldering Station – this will last a lifetime for most people.

This handy little diagram shows where each of the parts go. Don’t worry if it looks a little overwhelming, we will be going through this step by step! 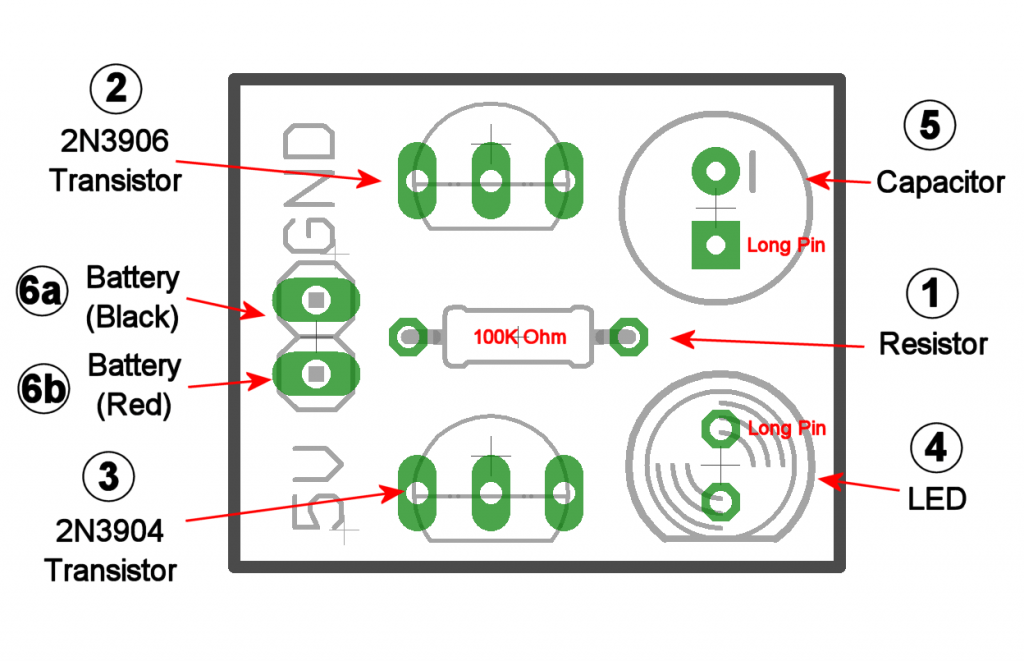 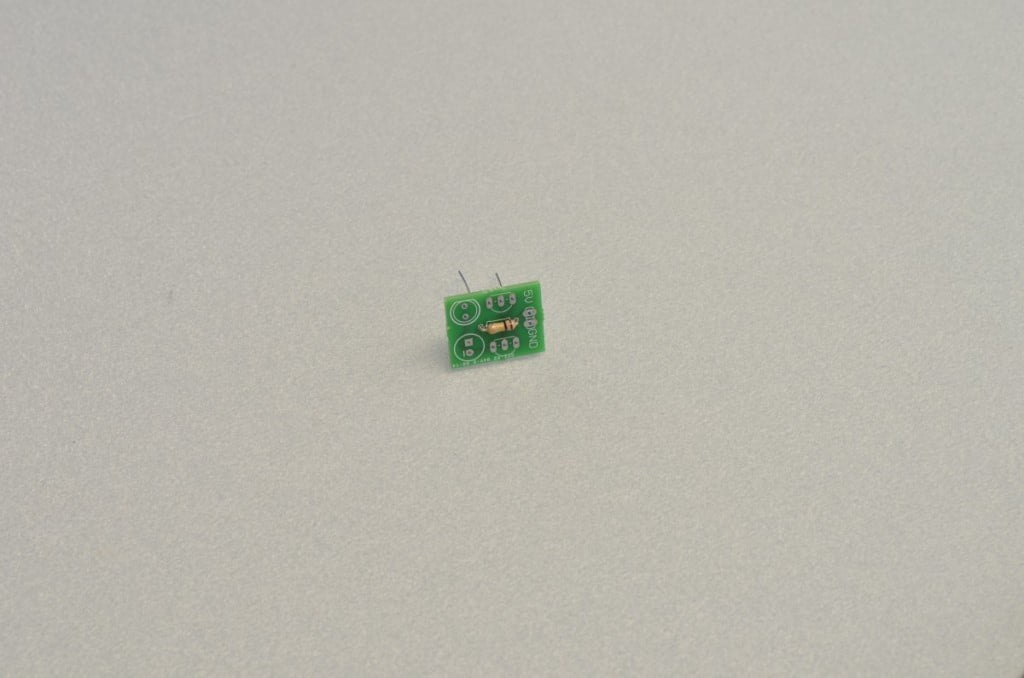 Generally when assembling any circuit board it is best to start with the shortest items first. In our case, this will be the 100K ohm resistor. The resistor does not have a positive or negative side and can be inserted either way. On each side of the resistor, bend the lead/leg 90 degrees and push it into the two resistor holes indicated in the above diagram. If the resistor seems to sit crooked or the legs do not seem to want to go the entire way through the hole, pliers can be used to pull each leg through. 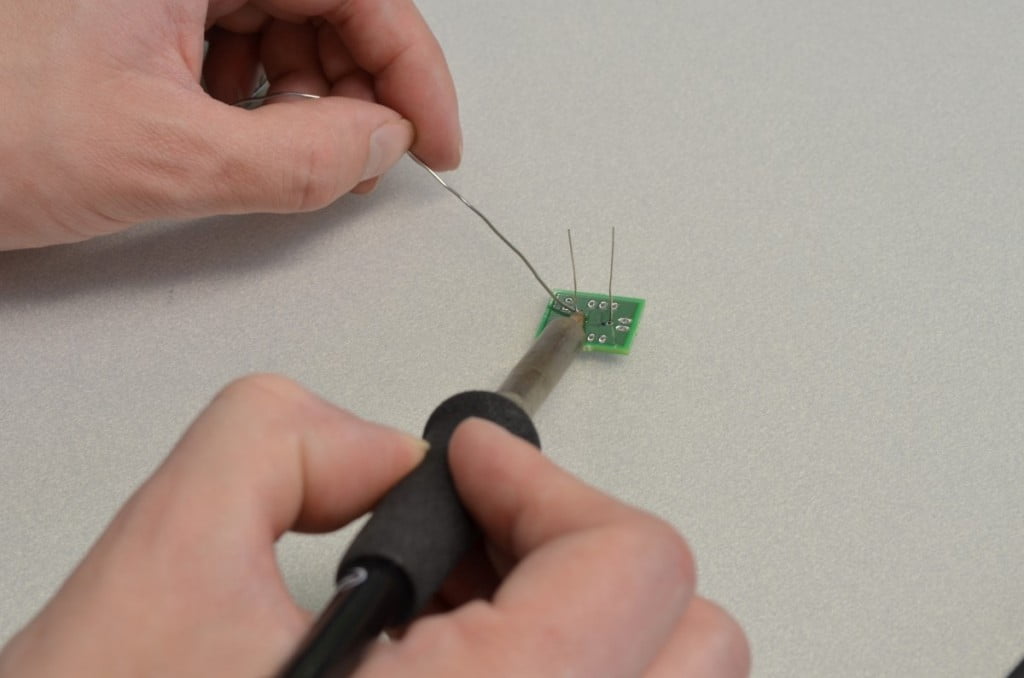 If you have never soldered before we highly recommend reading this Awesome Comic that illustrates all the basics of soldering before moving on! 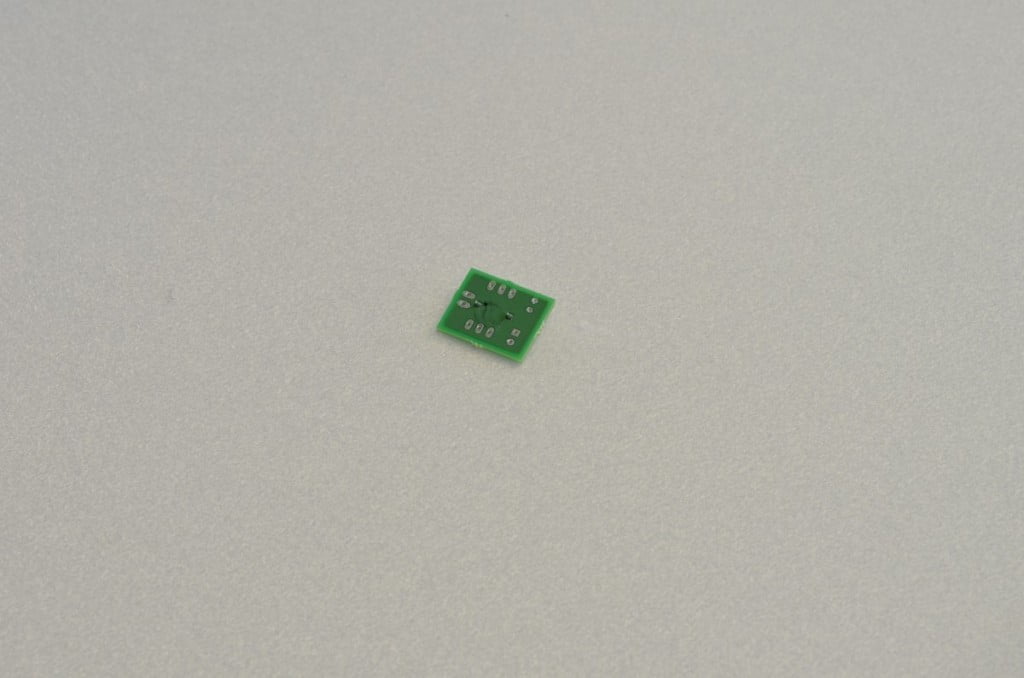 Now trim each of the legs just above the solder joint to get rid of the excess. The end result should look like a small tent/pyramid of solder similar to ours!

We will keep following this same process of lining the component up, soldering it in, and trimming the legs for each component. 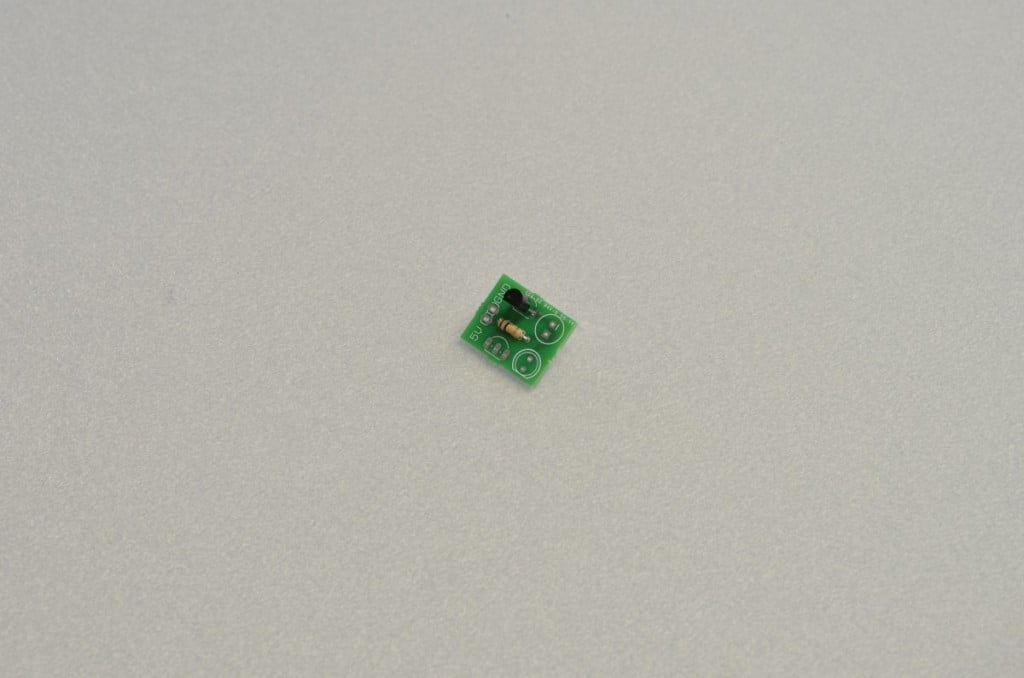 There are two very similar transistors in this kit and two identical footprints in the circuit board so it is important to get the right one in the right spot! Finding the right one is not too difficult – the name of each one is stamped on the front. We are looking for the one labeled “3906”. The 2N3906 Transistor will go in the 3 pin footprint beside the text “GND” on the board. The flat side of the transistor should match up to the flat side on the footprint on the PCB. Once it is inserted flip the board over and solder the three legs. The legs can then be trimmed to length. 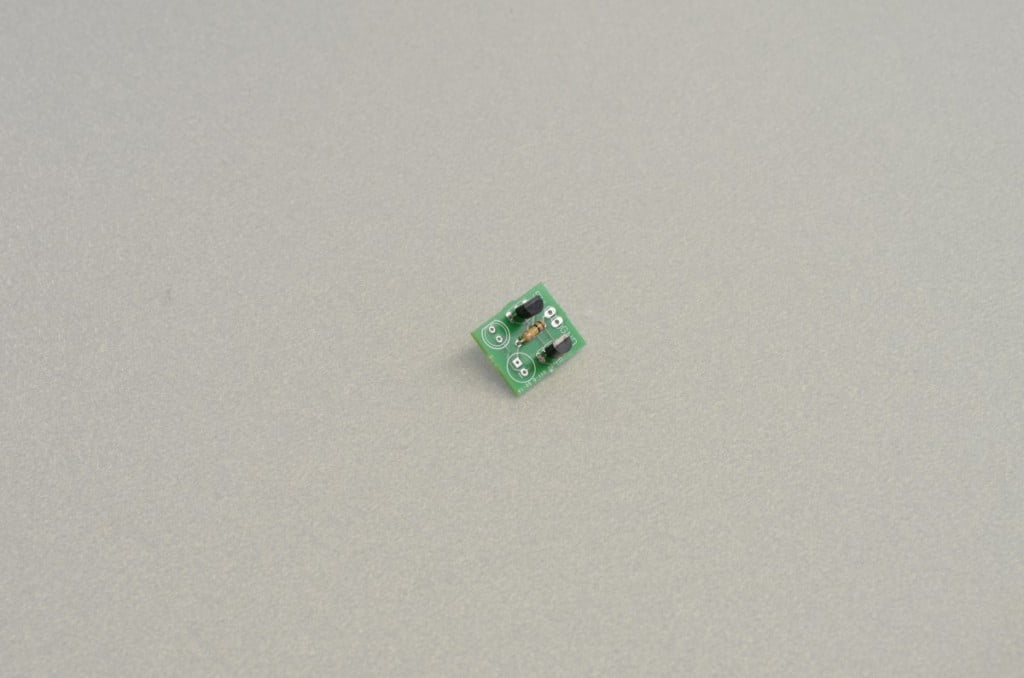 Next we will install the 2N3904 transistor. This transistor should be labeled 3904 on the front and fits in the second transistor footprint next to the label “5V” on the circuit board. This will be lined up the same way as the last one. Once it is lined up it can also be soldered in and trimmed to fit. 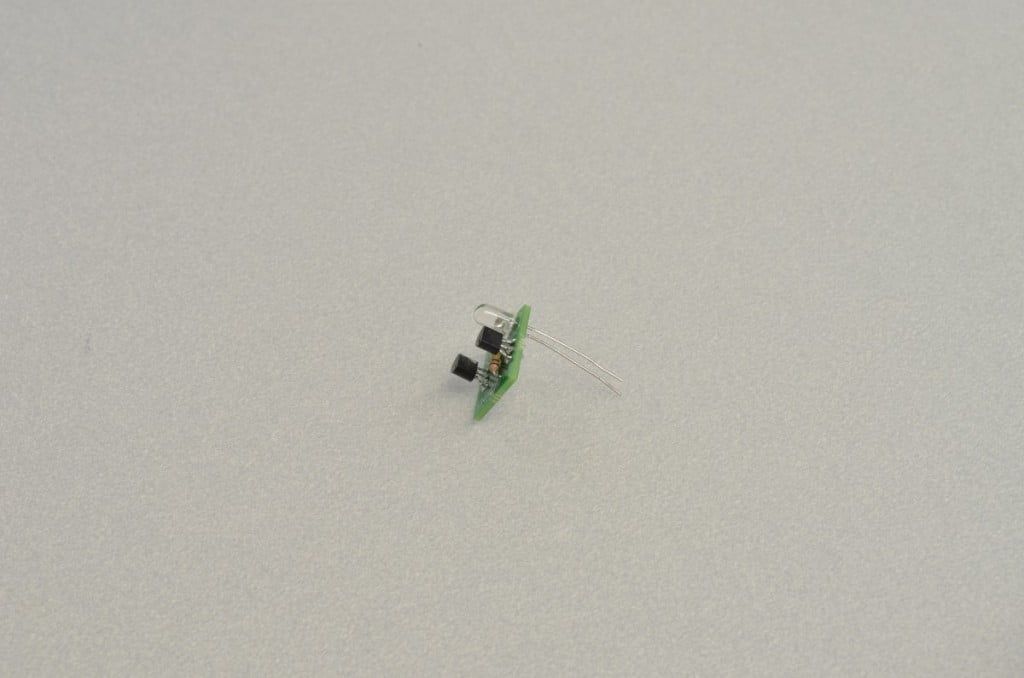 The circuit would be pretty boring without an LED! The LED has two legs with one longer than the other. We need to make sure this part goes in the right way otherwise it will not light up. The LED is going to go next to the 2N3904 Transistor, in the footprint that looks like a circle with a flat side. The flat side indicates the 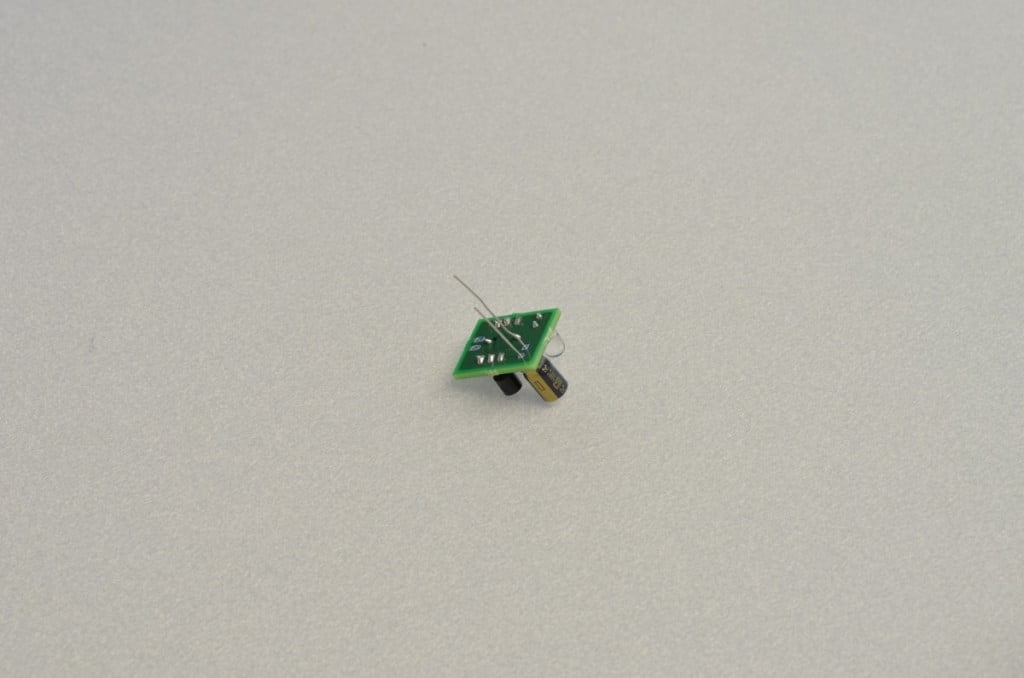 The capacitor is just like the LED in the sense that it can only be inserted one way. The capacitor will go into the last large footprint, right beside the LED. One of the holes on the board is marked with a small “-” to denote which hole is negative. The Capacitor is also is marked on one side with a stripe that indicates the negative side. Match up the negative leg with the negative hole in the footprint and insert the part. It can now be solder in place. 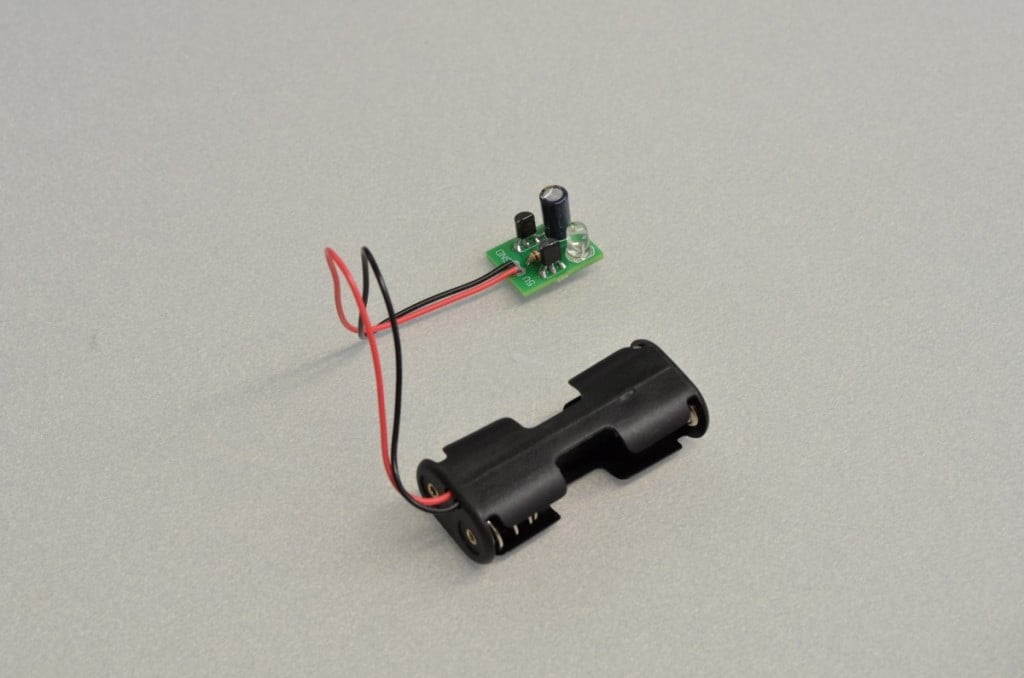 The battery holder has two wires, red and black. The black wire is the negative on the battery and can be connected to the hole labeled “GND” on the board. The red wire is the positive and can be connected to our input voltage on the board labeled “5V”. The board does say it requires a 5V input, the ~6V output by two AA batteries is perfectly fine.

If everything is right, inserting 2 AA batteries should start the blinky light up!