Home › Tutorials › Getting Started With The Raspberry Pi Zero 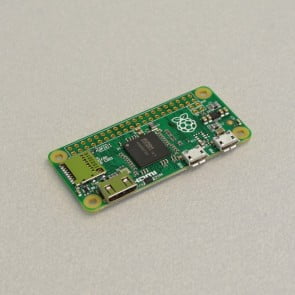 Getting Started With The Raspberry Pi Zero

The Raspberry Pi Zero is the latest single board computer released by the Raspberry Pi Foundation. The Zero is a change in direction for the foundation; it is a direct shot at making the cheapest single board computer possible. Being cheap does not mean this board is lacking power, but there are some differences to note between this board and the previous versions of the Pi. In this tutorial we will go over the differences between the Zero and the Raspberry Pi 2B as well as get one set up as a very cheap computer!

A Few Considerations:
Before we set up this brand new Raspberry Pi there are a few things to note:

• While the Zero is very low cost, it is not ready to use right out of the box. There are peripherals that are required.
• The single USB output port and lack of Ethernet jack do make connecting this version of the Pi to the internet a little more difficult.
• Unlike the previous version, the Pi Zero does not have hot-swappable USB capabilities; this means the Pi will reboot every time a USB device is plugged in!

How It Works:
The Pi Zero, like all previous versions of the Raspberry Pi, take advantage of many of the electronics found in modern smartphones and other portable electronics. The mass production of these parts combined with the sheer number of Pi being built (Along with many other factors) allow the Raspberry Pi Foundation to build a very low cost single board computer with astonishing performance. Rather than a standard phone operating system; the Pi runs various flavours of Linux. In this tutorial we will be working with Raspbian Jessie which is based off of Debian Linux. 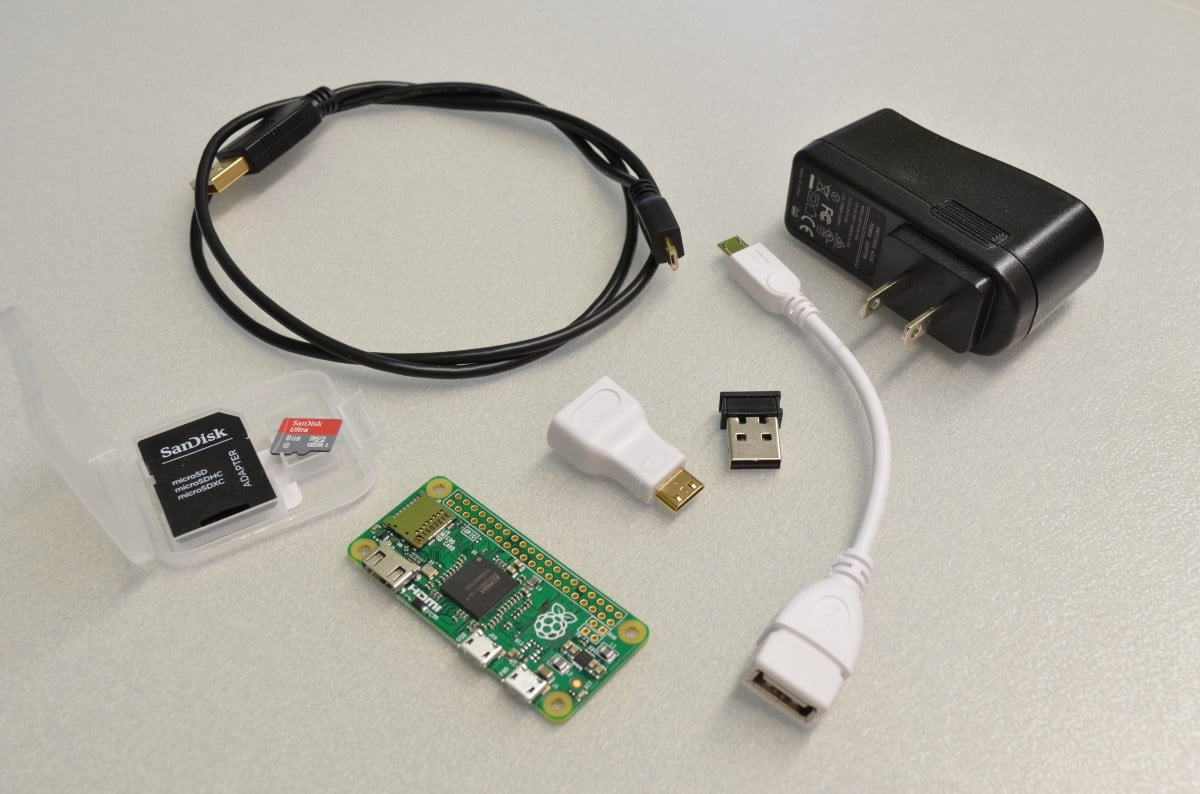 This tutorial will be requiring a few parts:

*Since there is only one USB port on the Raspberry Pi Zero we recommend using a Wireless Keyboard / Mouse combo as they typically share a single USB dongle. 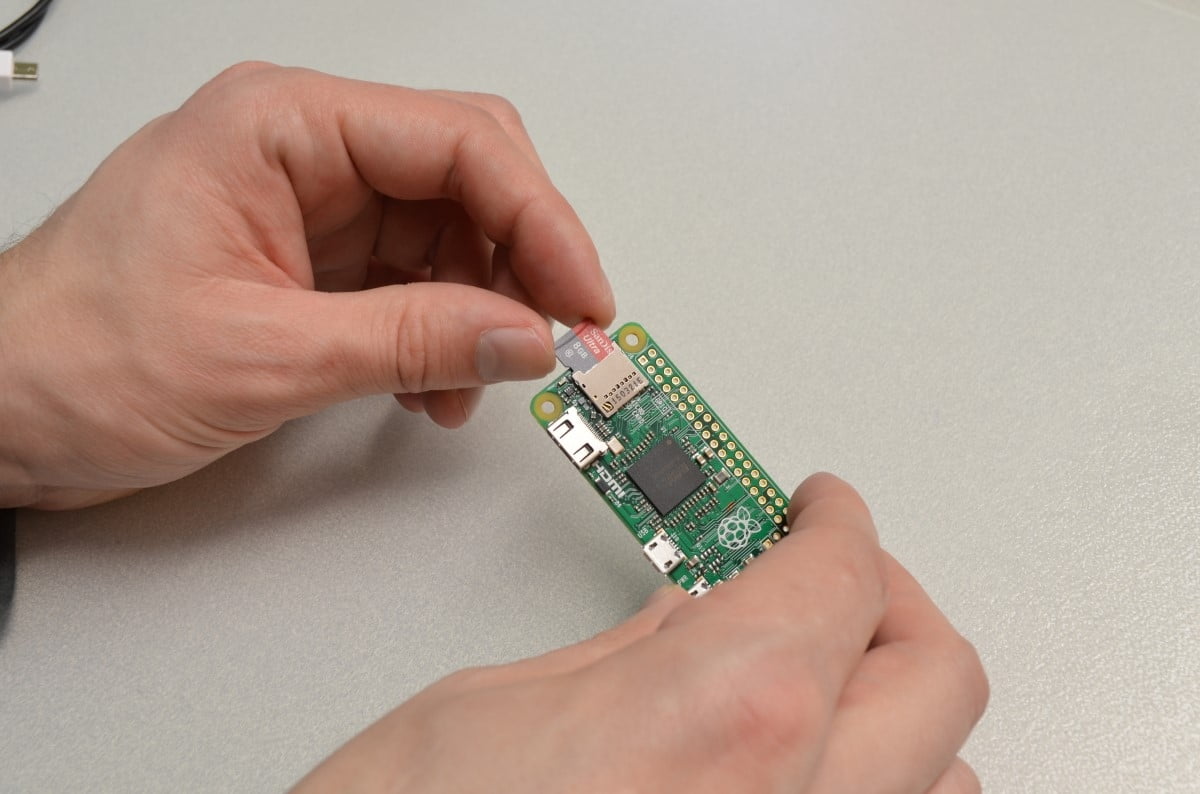 Time to get this Zero up and running! We are going to start by inserting the MicroSD card into the microSD card slot on the top of the Pi. We have pre-installed the latest version of Raspbian on this card in preparation for the tutorial. If you are starting with a blank microSD card you will need to install an operating system on it before starting the Pi. 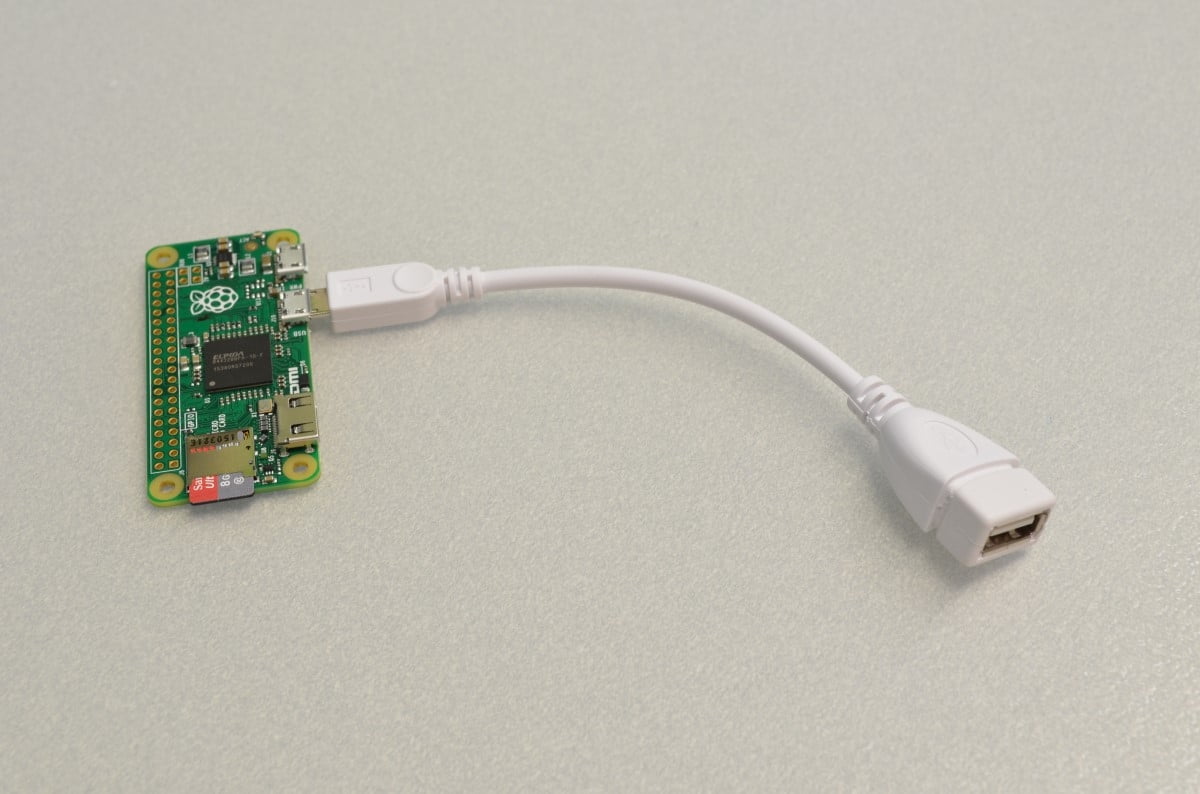 We are going to plug a USB OTG (On The Go) cable into the “host” micro USB port closer to the middle of the board to convert it to standard USB. 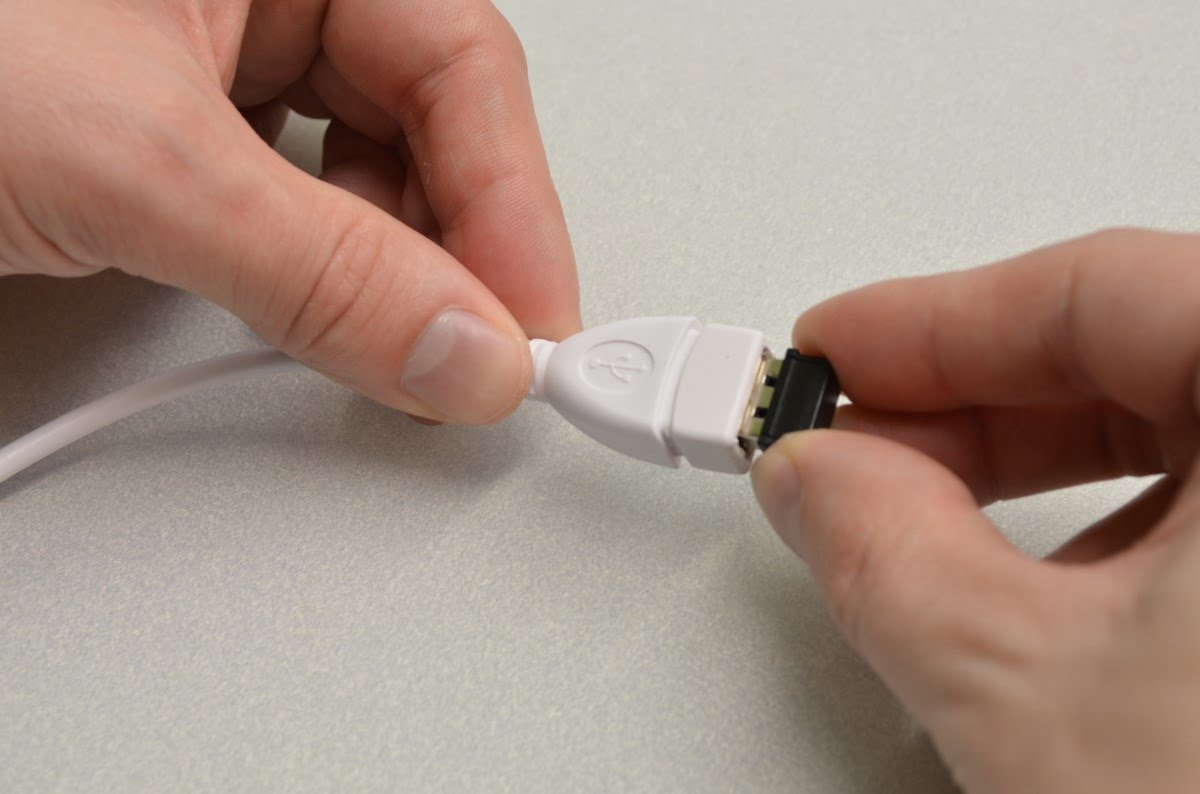 Since the Pi Zero has a single USB port, using a separate keyboard and mouse becomes a little more involved. A simple USB hub can solve this problem, but to keep things even easier we recommend using a combination Wireless Keyboard and Mouse – only one USB port required!

Plug your wireless keyboard and mouse dongle (or USB hub with Keyboard and Mouse) into the OTG cable. 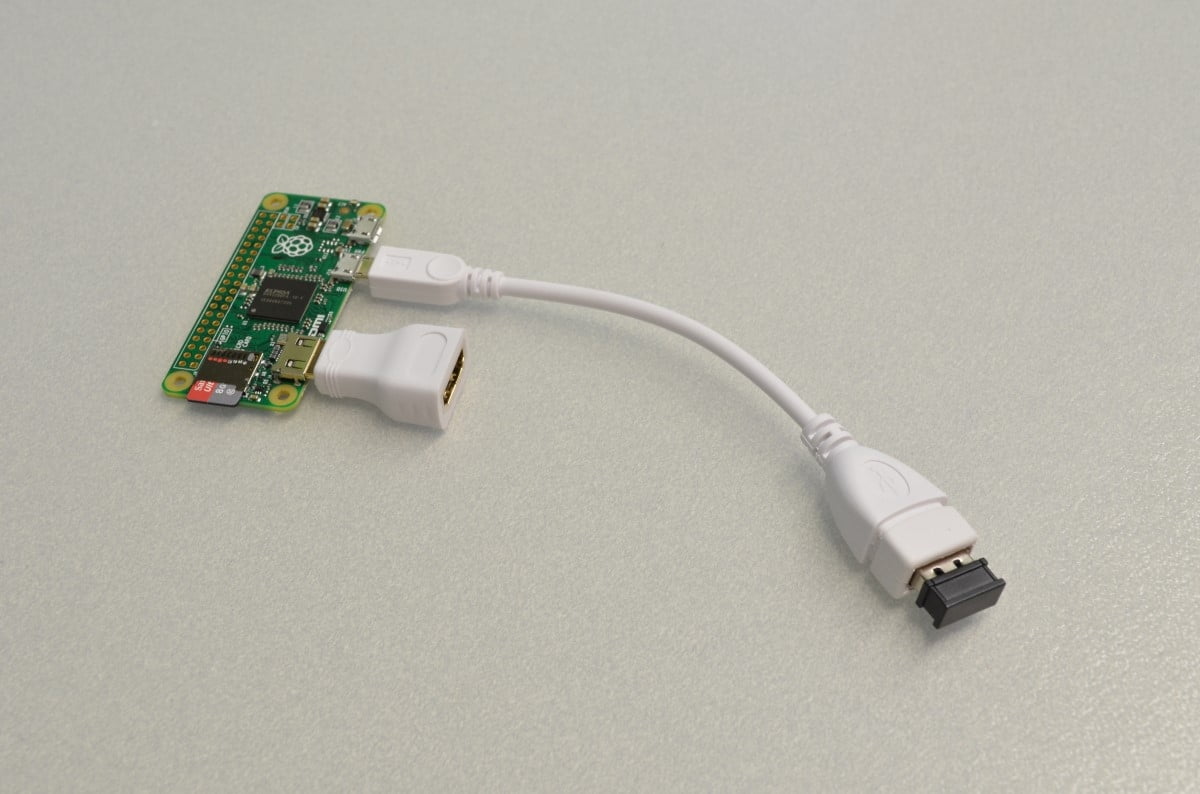 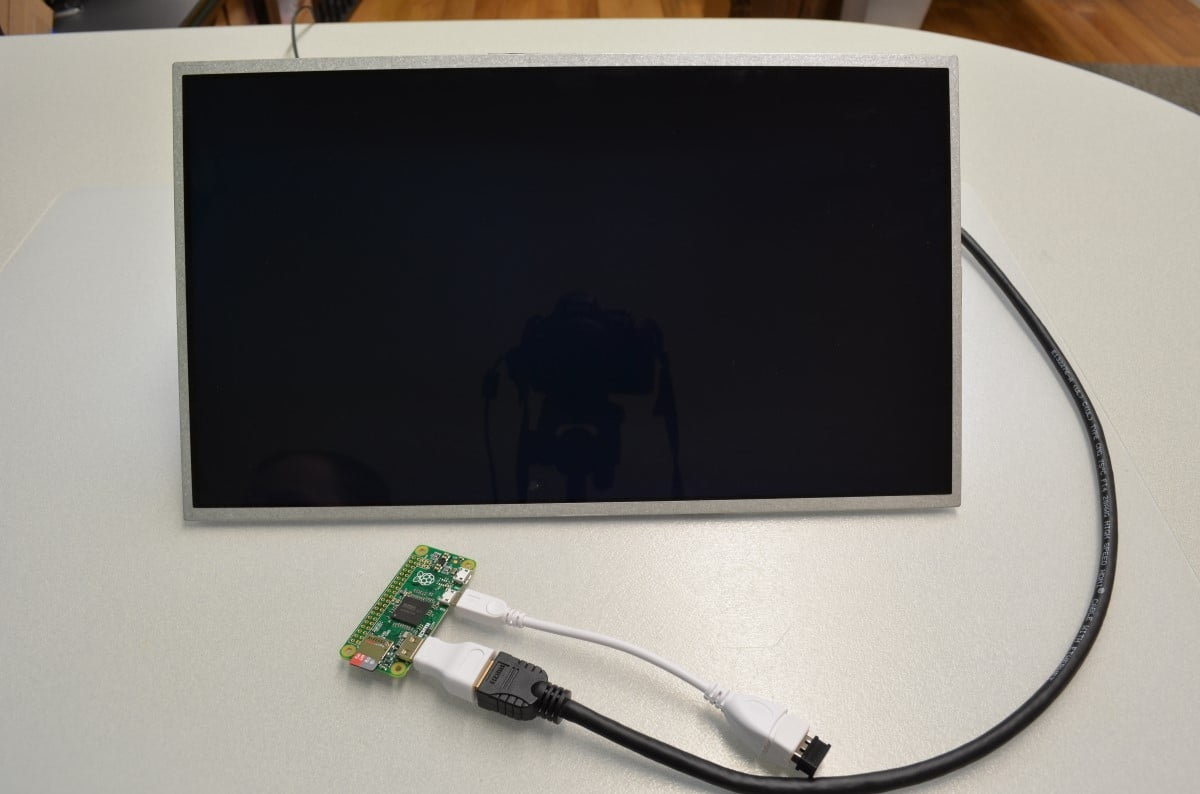 The Zero, like all other versions of the Raspberry Pi, can be used with a variety of different monitors, screens, and televisions. We will be focusing on a screen with standard HDMI input (just like a TV or newer computer monitor). To use this output just plug your HDMI cable into the TV or monitor and the HDMI dongle on the Raspberry Pi.

Alternately the Pi can also be used with: 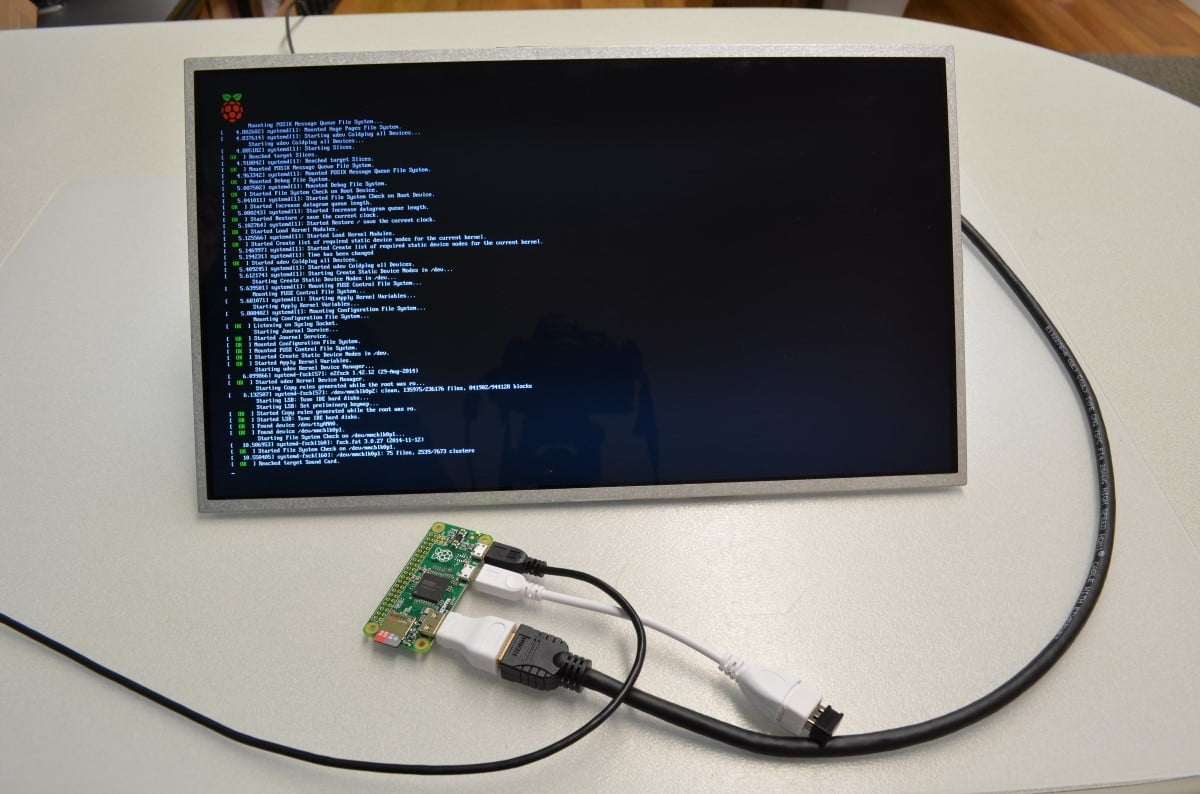 Now that everything is connected the Pi, it is ready to be powered up! We used a 1A Power Supply with a micro USB cable but any Raspberry Pi compatible power supply or sufficiently powerful phone charger with a micro USB output will work.

Once the power is plugged in, the Pi will begin to boot. The small LED will light up and the screen should jump to life.

If the LED does not turn on: Double check your microSD card is inserted. 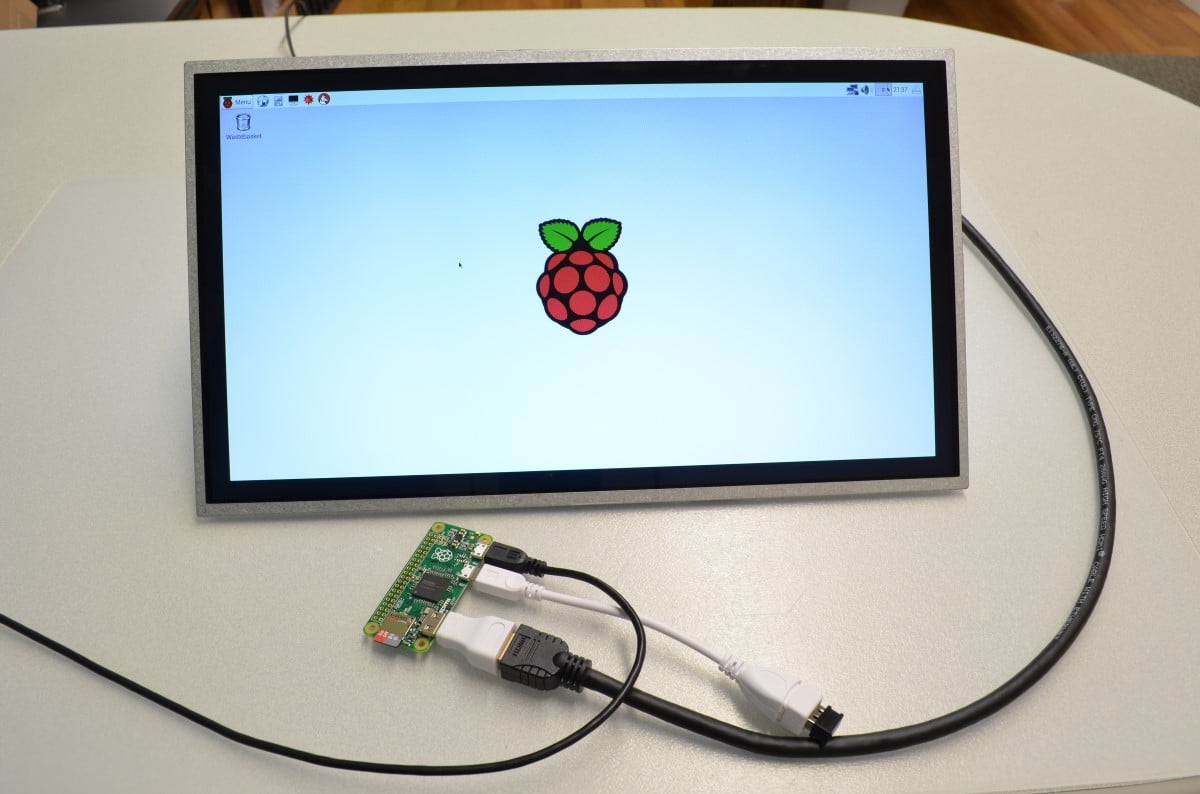 Once the Pi has finished booting it will bring you to the Raspbian desktop. In this case, the monitor we are using requires a little more configuration; computer monitors and most LCDs require one change to the display settings. We are going to switch off “Overscan” and get rid of that big black border around the edge of the screen. If you do not have a black border around your screen – this is the end! 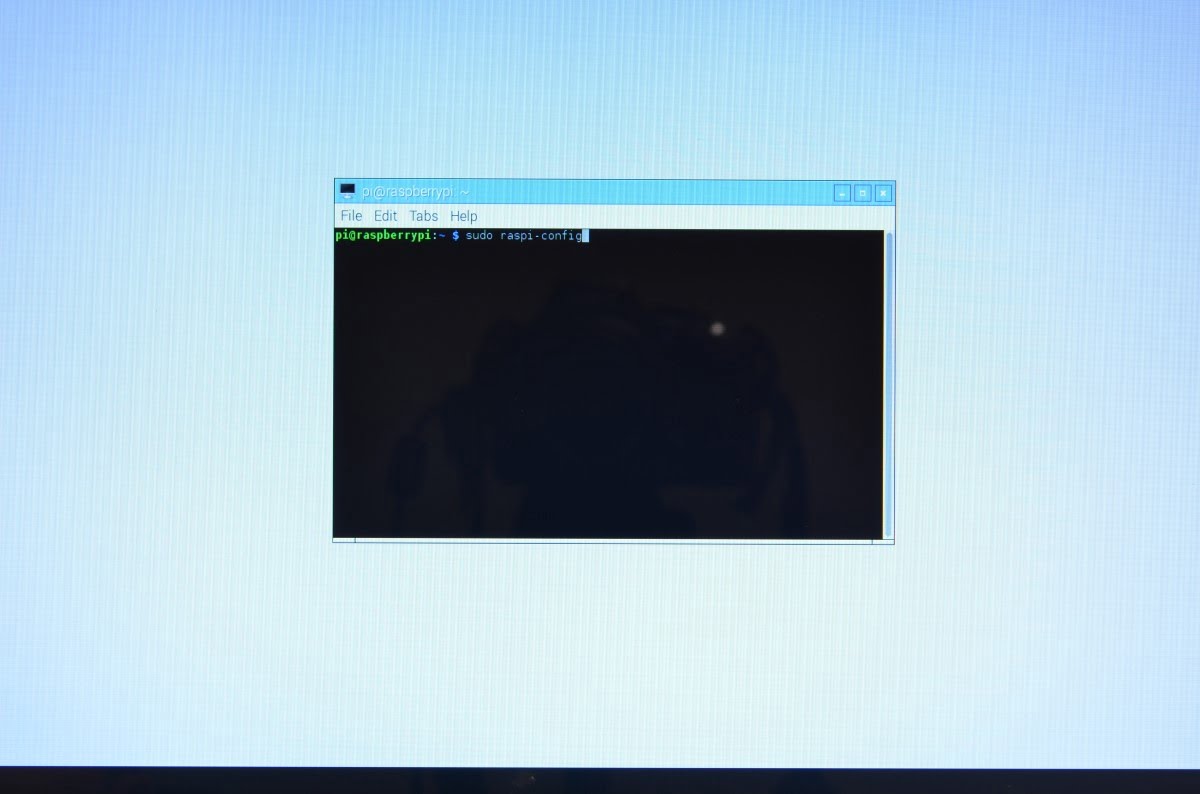 To change the configuration settings we will first need to start up “Terminal” (this is the black square monitor logo at the top left corner of the screen). The terminal allows users to run commands and programs directly through text. In this case we want to run “raspi-config” to alter the pre-configured settings.

Type the following into the terminal:

And then press “Enter” on the keyboard. This will start the Raspberry Pi Configuration ! 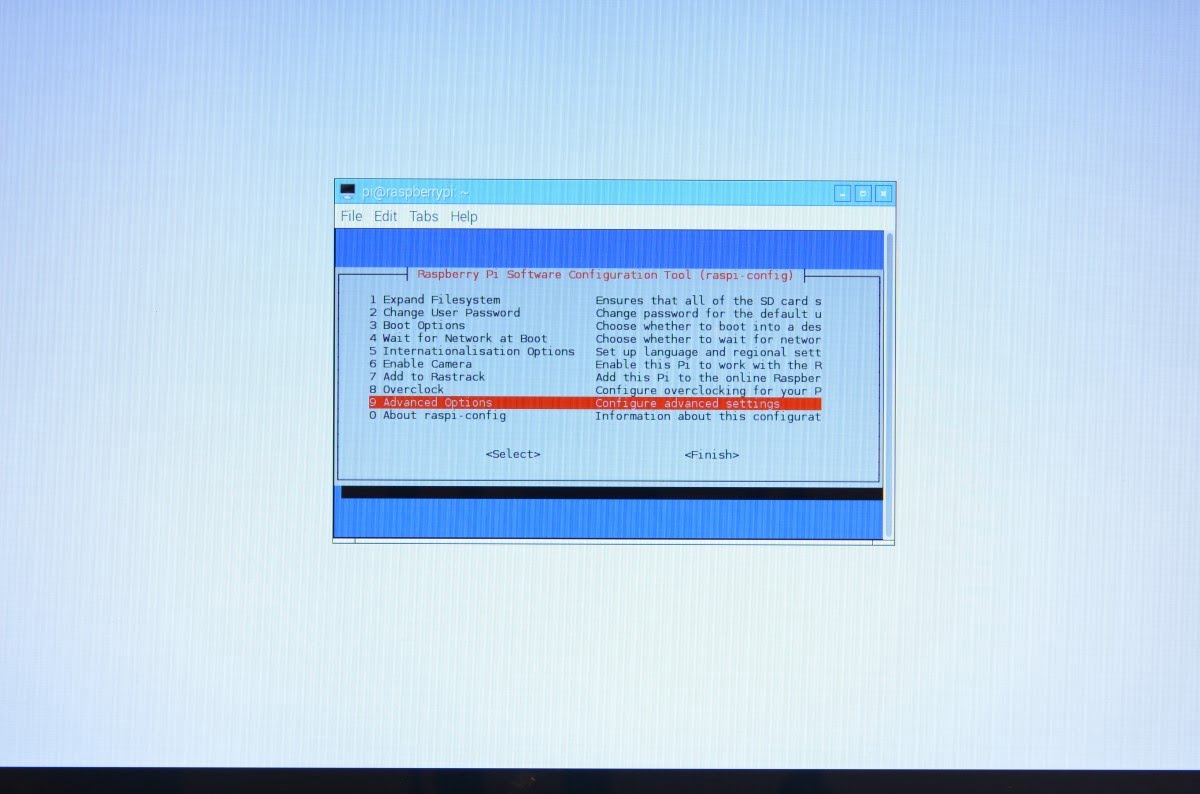 Scroll down to “Advanced Settings” using the keyboard arrows and hit “Enter” again to access the advanced settings.

On the next screen select “Overscan Settings” and hit “Enter” again to access the overscan settings. 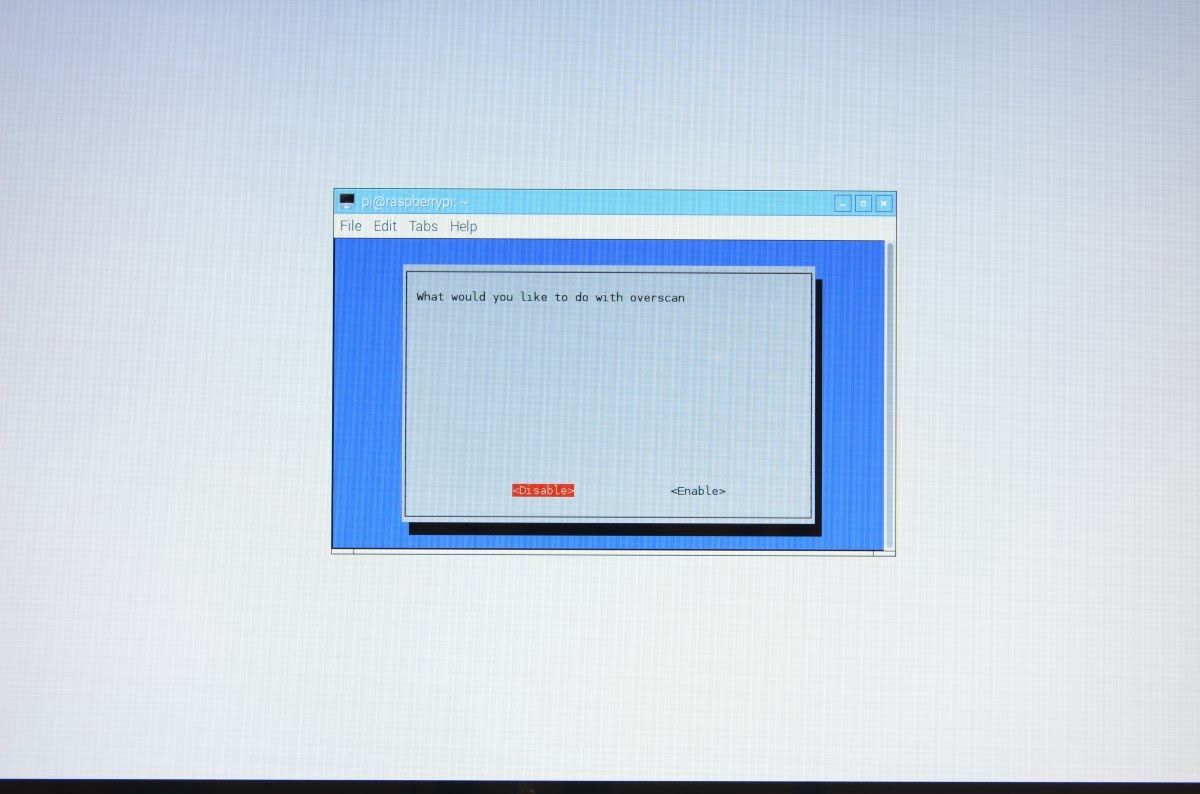 Using the left / right arrow keys select “Disable” and hit “Enter” on the keyboard. This will change the configuration and take you back to the previous screen. 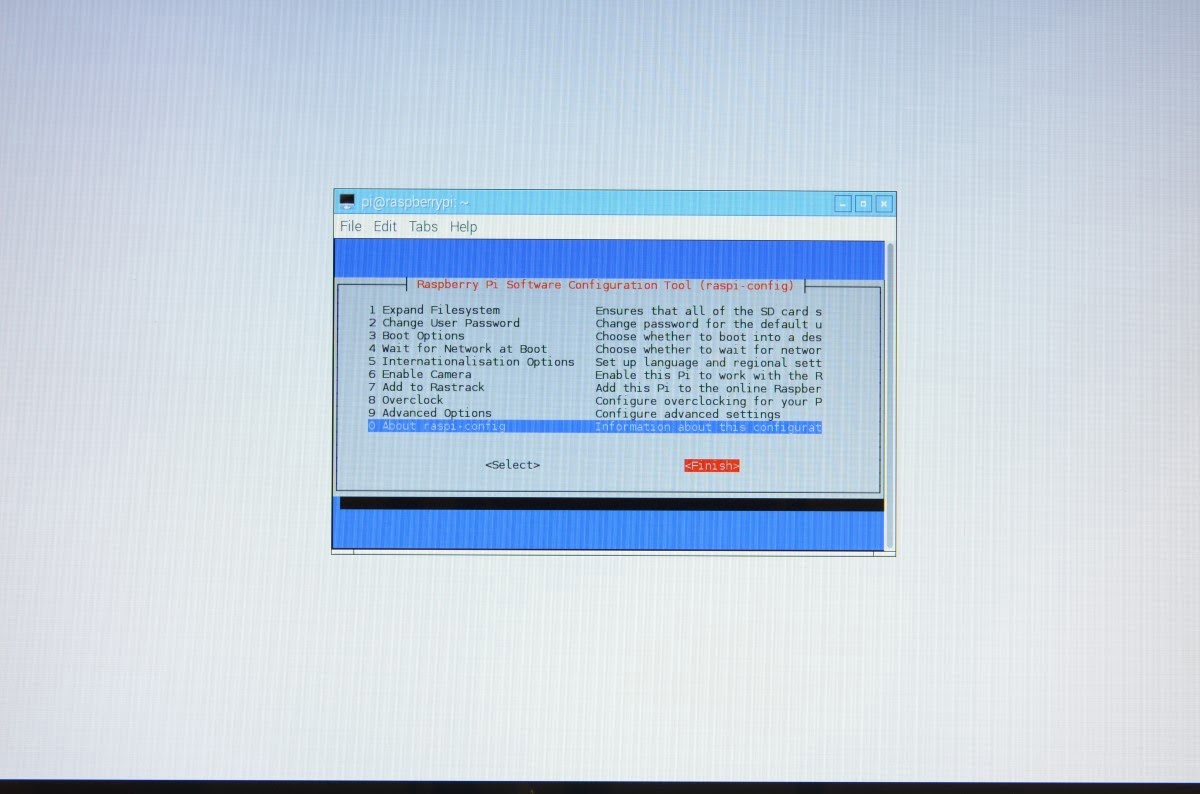 Scroll down to the bottom of the menu using the arrow keys to select “Finish” and hit “Enter” on the keyboard to exit the settings. You will be prompted to reboot the Pi – select “Yes” and wait for the Pi to reboot. 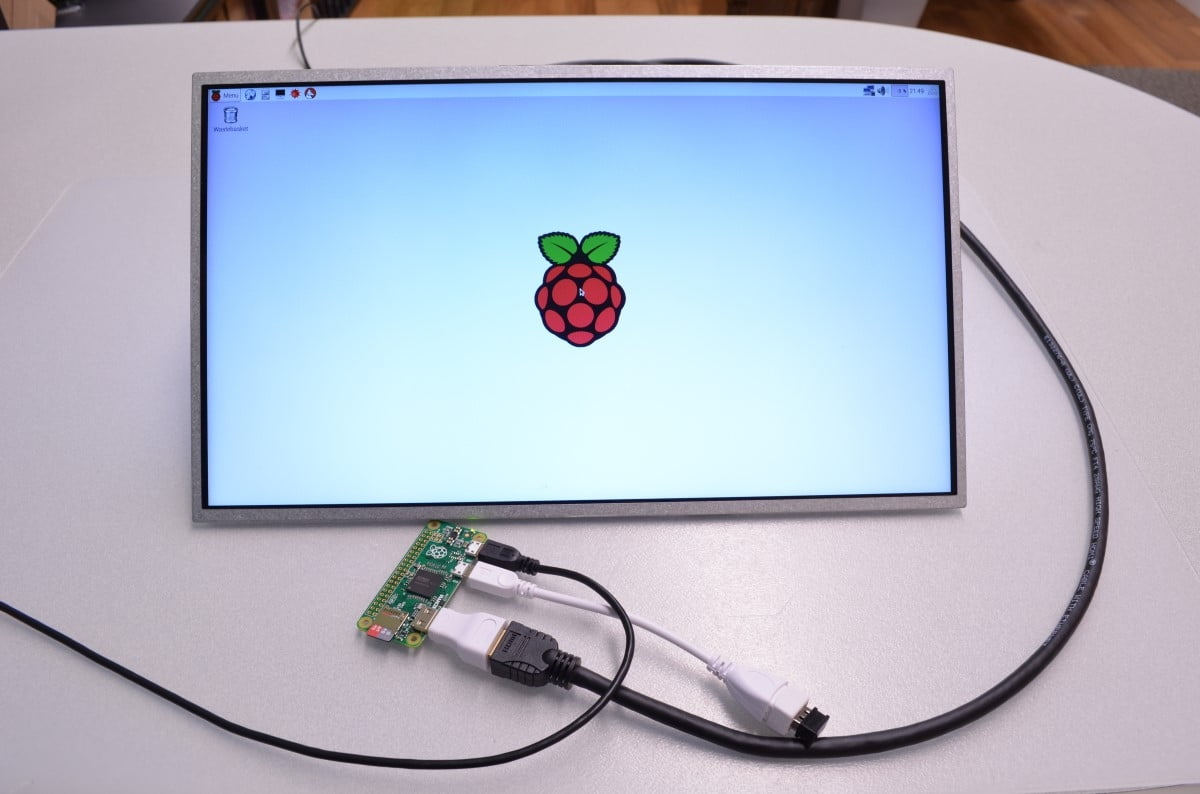 With overscan disabled, the screen is now fully used! If you have any questions, or need further clarification please post in the comments section below; this way future users of this tutorial can see the questions and answers!